Breck Denny guided a private tour of this fascinating piece of New York City history, followed by lunch in a neighboring restaurant....

CHV member and Marble Cemetery trustee Breck Denny led 14 CHV members and friends on a private tour of this fascinating piece of New York City history, followed by lunch in a neighboring restaurant.

Founded in 1830, the New York Marble Cemetery is the oldest non-sectarian cemetery in New York City. With no tombstones, this landmarked cemetery looks like a half-acre walled garden, hidden away within the city grid, and is only open to the public about once a month during the warmer weather.

The original owners of the 156 underground vaults were among the leaders of the city during a period of rapid growth and transformation between the War of 1812 and the Civil War. For further information, please visit the website at www.marblecemetery.org.

The tour lasted about an hour. A Dutch treat lunch at Rosie’s, a nearby Mexican restaurant, immediately following the tour. 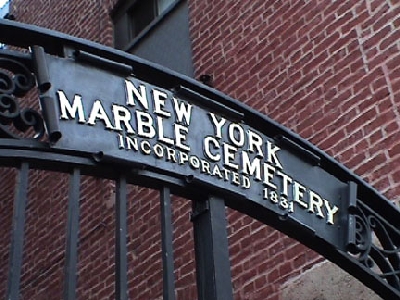